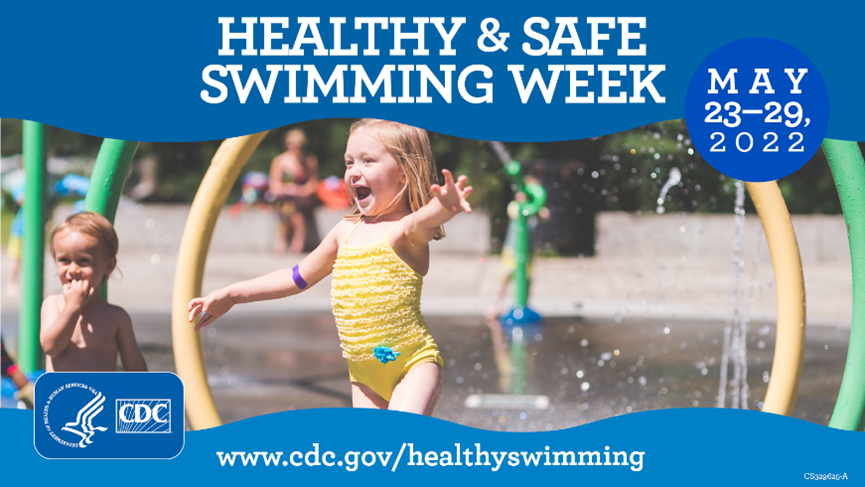 The final bell of the school year rings, and the eagerness of summer begins.  The heat of summer is relieved by the splashing, swirling, bubbling wonders of water in local pools, lakes, and rivers.  Many people are drawn to water for its cooling properties, the joy of movement unrestrained in the buoyant environment and the community of family and friends enjoying the signature activity of summer together.  May is National Water Safety Month and May 23-29 is Healthy and Safe Swimming Week, and West Central District Health Department is here to help you and your family enjoy the benefits of healthy swimming.  We are launching our blog with important information throughout this week about drowning, drowning prevention, and recreational water-borne illnesses.  You will also be able to see water safety tips for the whole family on our Facebook page.

Most people delight in water and too often forget that there are inherent dangers that come from water-rich environments.  The ability to enjoy water safely means understanding the risks in a wide variety of aquatic settings, learning how to stay safe in each, and eliminating common misconceptions about the potential dangers of water.  We’d like to share some basic water safety information to help your family have the safest summer of swimming possible.

To understand water safety, it is important to have a basic understand drowning.  There is no such thing as being drown-proof.  There is also no such thing as “safe water,” only “safer water.”  The strongest, fasted, most gifted swimmers in all the world are lifeguarded whenever they are in the pool during the Olympics.  Anyone can drown. Water is one of the most powerful forces on earth and should never be taken lightly.  There should always be an emergency plan in place whenever your family is near the water.  Any illness or injury that can happen on land can also occur in water and the water makes dealing with the unexpected much more difficult.  Children are most at risk and extra care must be taken any time there is water around.  According to the Centers for Disease Control and Prevention, drowning kills nearly 4000 people each year in the United States and drowning continues to remain the number one leading cause of accidental death for children 1-4 years of age.  Between 2010 and 2019, there were 8,000 emergency department visits for non-fatal drownings.  Drowning injuries can result in brain damage, long-term disability, and a lifetime of crushing medical costs.  Another sobering statistic is that many people who drown, including children, never intended to get wet.

While the risk to children may be more commonly understood, there are also other groups who are at higher risk of drowning.  Males make up nearly 80% of drowning deaths, and the CDC sites increased water exposure, risk-taking behaviors and alcohol use as potential factors.  There are long-standing inequities in access to swimming pools and swimming lessons across the country.  Drowning rates for Indigenous Americans or Alaska Native people ages 29 and younger are 2 times higher than the rates for White people, with the highest disparities among those 25-29 (rates 3.5 times higher) 1,2  Drowning death rates for Black people are 1.5 times higher than rates for White people.  Disparities are highest among Black children ages 5-9 (rates 2.6 times higher) and ages 10-14 (rates 3.6 times higher). 1  People with seizure disorders such as epilepsy are at higher risk for fatal and nonfatal drowning than the general population and other medical conditions such as autism and heart conditions are associated with a higher risk.3,4,5,6,7

Water safety is a public health concern and our best weapon against drowning is information and education.  In his ground-breaking research on the nature of drowning titled “On Drowning,” Frank Pia, PhD, documented the potential consequences of the inability of people to recognize the signs of drowning.  His work captured images of parents enjoying the summer sun, watching their child play in the water.  What they were actually watching, however, was their own child drowning.

Drowning looks nothing like the way you may have seen it portrayed on television or in the movies.  The inability to self-support in water, for what ever reason, leads to something known as the “instinctive drowning response.”  Drowning is a continuum of events, that will ultimately be fatal without intervention.  Drowning behaviors are instinctual and those who are actively drowning cannot call out for help.  There are 3 types of victims according to the American Red Cross.  Distressed swimmers are those who may be good swimmers but who suffer an unexpected incident in the water such as a cramp, sudden illness or those who have overestimated their ability to swim.  Those in distress can, for a short time, self-support and may call out for help, but make little or no forward progress.  Without quick response, distressed swimmers can very quickly panic and become active drowning victims.

Active drowning victims are unable to self-support.  They may press down on the water in an effort to lift the airway above the surface of the water as they try to take a breath, but these efforts are short-lived and ineffective. They have no supportive kick, and the head may be tipped back with the eyes tightly closed or wide open.  The surface struggle can last as little as 30 seconds before the victim begins to sink below the surface.

Passive drowning is a multifactor emergency.  Sudden illness, repeated breath-holding with or without hyperventilation, panic, spinal injury, hypothermia and drug and alcohol use are common causes.  The victim simply sinks below the surface with no sound or signs of a struggle.  Whether it be a distressed swimmer, an active drowning victim or a passive drowning victim, all those who love spending time in, on or around the water should be aware of the behaviors of people in trouble.

Two commonly held misconceptions about drowning are that it takes many minutes and that there will always be some kind of sound or struggle involved.  These misconceptions are especially dangerous when children are involved.  Young children, even when in very shallow water, are often unable to lift their head above the surface because of their disproportionately large heads.  Additionally, they often have ample “baby fat” which causes the body to be more buoyant, making it more difficult for them to get to their feet.  Infants have nearly no ability to lift their heads.  Young children drown silently, in as little as 25-30 seconds with no surface struggle.  Those who do struggle at the surface often appear to be playing to the untrained eye.  Toddlers are quick and can enter the water during a single moment of inattentiveness by an adult.  There may be no splash, no noise, and no struggle.  Submersion is often quick and quiet and even a moment of inattention on the part of an adult can lead to a tragedy.

The American Academy of Pediatrics advises that all children need close (within arm’s reach), constant and vigilant supervision.  The presence of lifeguards does not mean that parents don’t need to supervise their children.  It takes layers of protection to truly keep children and other non-swimmers safe in and around the water.  Parents or other attentive adults are the first and best defense against drowning.   Water safety is everyone’s responsibility and keeping everyone safe in, on and around the water takes everyone in the community doing their part.   Understanding the behaviors of drowning victims and the quick and quiet nature of most drownings will go a long way in helping you keep your loved ones safe while they are enjoying summer’s favorite activity.

In our next blog post, we’ll offer important public health information about ways to reduce drowning risk throughout our communities.  Summer is here and swimming is one of the most positive, healthy and enjoyable activities families can share.  With an understanding of drowning, drowning prevention and recreational water-borne illness, we hope to help you and your family splish, splash, jump and dive into a happy, safe, and healthy summer swim season.